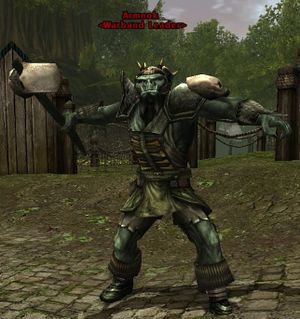 
Description: Armnok is the leader of the warband raiders attacking Nash Braza's farmstead. He is a powerful spellcaster who can cast spells from both arcane and divine spell lists. Accompanied by a large number of orc support troops on elite, his fight can be one of the most difficult fights for low level characters. Defeating him awards a chest which can drop the Crude Bauble.