From DDO wiki
(Redirected from Altar of Vulkoor)
Jump to: navigation, search 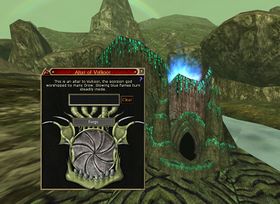 Dampened: This item has been in a wet environment for too long and its original power has been weakened. Combine it with a Token of Vulkoor at the Altar of Vulkoor in the Red Fens to restore it back to its former glory.

An altar to Vulkoor, the scorpion god worshipped by many Drow. Used to remove the Dampened effect from items and upgrade them, by combining them with a Token of Vulkoor. 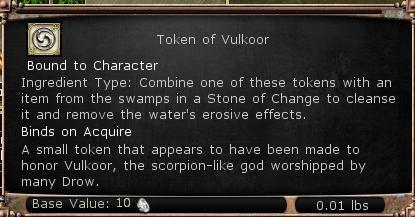 Golden Swamp Pearls are a rare drop from Colossal Clams within the wilderness and quests located in the The Red Fens.

Items with the "Dampened" attribute are found in the End chests and some optional chests throughout The Red Fens. The quest the The Last Stand does not drop any "Dampened" items.

Items with the "Dampened " attribute are found in their respective quest. Running the quests on higher difficulties will greatly increase the droprate.