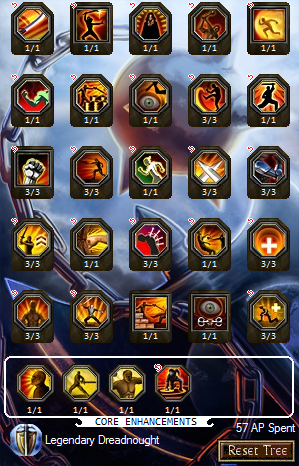 Overview: Legendary Dreadnoughts are powerful warriors with a commanding presence. They specialize in either Melee or Ranged weapon combat, using their martial prowess to impair nearby enemies. Dreadnoughts are the most versatile at using Tactical Feats, gaining bonuses to all Tactical Feats and access to Dire Attack, which can Sunder, Trip, and/or Stun foes. They are the masters of Action Boosts, gaining access to exclusive boosts and gaining significant bonuses any time they activate an Action Boost. Dreadnoughts are versatile in their martial prowess, and can excel with any Melee or Ranged weapon.