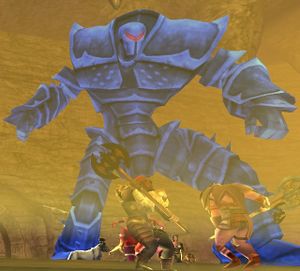 Habitat: The Vault of Night

Does not possess spellcasting.

Overrun: The ability allows the monster to Knockdown the player prone simply by moving through them. Then continue to pummel them with damage. The DC is made against the player's Strength or Dexterity, whichever is higher.
Poison Breath: Moderate con damage. Negate with Neutralize Poison.
Reactive Shielding: Hitting Arach will result in "reactive damage", a counterattack that does an equal amount of sonic damage based on how much damage you dealt - Up to a certain maximum amount - roughly 30 on elite, and about 40 on epic. A reflex save is allowed to take half damage, and energy resistance/protection effects work as usual, so a standard sonic resistance buff will generally negate all the damage on elite, but you'll still take a small amount on epic if you fail the reflex saves.
Elemental Adamantine Defenders: Arach is accompanied by 4 special red named elemental-infused adamantine defenders. Similar to Sorjek (Lich), each one provides him with a special bonus:

Arach's Knight is immune to any spell or spell-like ability that allows spell resistance. In addition, certain spells and effects function differently against him, as noted below.

A magical attack that deals lightning damage slows an iron golem (as the slow spell) for 30 seconds, with no saving throw. However Arach is immune to lightning so this does not apply to him.

A magical attack that deals fire damage breaks any slow effect on the golem and heals 1 point of damage for each 3 points of damage the attack would otherwise deal. For example, an iron golem hit by a fireball gains back 6 hit points if the damage total is 18 points. An iron golem gets no saving throw against fire effects. However Arach is instead immune to fire if his fire hound dies.

Unlike in PnP, most damage spells in DDO do not allow spell resistance. To combat this, Arach instead has massive elemental absorption. 50% Absorption for all Energy types that he is not immune to. This includes: Lightning, Cold, Acid, Sonic, Light and even Force damage. This is new as of Update 9. Previously they were simply immune to all these damage types.

Arach is affected normally by rust attacks, such as that of a rust monster or a deconstruct spell.