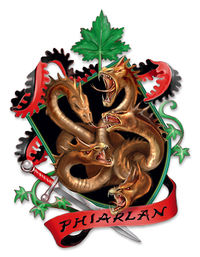 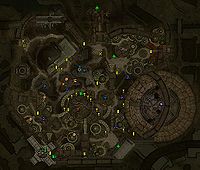 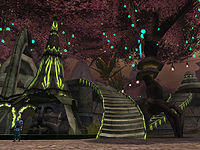 An elven dragonmarked house, the members of House Phiarlan carry the Mark of Shadows. This mark is also carried by House Thuranni which split off from House Phiarlan during the last war. The mark of shadows is the only mark carried by two houses.

Unknown to virtually every outsider, there is also branch of House Phiarlan that deals with more than just the arts. Its job is to oversee the house as a whole, and to be responsible for the information gathering, scrying, and spying. With occasional jobs dealing with assassination or theft. This branch is known as the "Serpentine Table". It does lease its services to outsiders occasionally, but only to the most wealthy and powerful of the nobles. Virtually every member of House Phiarlan serves as an informant to the Table - giving any interesting information they come across to liaisons in the House.

House Phiarlan has a tradition that can be traced all the way back to elves originally on Xen'Drik. When the elves rebelled against the giants, it was not the race of elves against the race of giants. It was various tribes of elves fighting various clans of giants. During the rebellion, a number of elves traveled between the elven tribes. Their purpose to carry messages, gather intelligence, keep alliances between tribes strong, and in general help to uphold the morale of the various tribes. These elves were known as "Phiarlans" or "Spirit Keepers".

In Aerenal, before the Undying Court unified the elven people, these Phiarlans continued to travel between the various tribes. Here, their role became two-fold. First as bards and entertainers they performed ancient arts from Xen'Drik as well as bringing news and messages from tribe to tribe. Secondly though, they used some of this news and information to help keep alliances, prevent rivalries from growing into feuds, and generally help the growth of the nation as a whole rather than individual city-states or tribes.

After the Undying Court was created, and the elves united both against the dragons and under the court, the Phiarlans were needed less and less as mediators between tribes. However, they were often paid by the Sibling Kings and by other nobles to act as spies, and bring information back to them. Phiarlans considered this to be helping the nation as a whole and so still a desirable task they were willing to undertake.

When Dragonmarks first appeared, the elves knew it was a momentous event. Even if they didn't fully understanding it. They had some familiarity with the Dragon's Prophecy, although even with centuries of study the could not fully comprehend it, and they know the dragonmarks were some how involved in the Prophecy. As a result, the Sibling Kings and other nobles started using their own security forces, the Deathguard, and the Cairdal Blades instead of Phiarlans, who bore a mark they did not fully trust.

After the followers of Vol were wiped out, the lines carrying the mark of shadows decided that perhaps it would be best for them to leave Aerenal as well. There had been no anger or aggression against those with the mark of shadows, but that did not mean that there could not be any one day. So, they migrated to Khorvaire. As a statement of their independence they formally renounced their lines and the name Aereni, forming a new alliance to be known as House Phiarlan.

Realizing that they were newcomers in a land with well established powers, they used their skills as artisans, entertainers, and bards to work their way into the houses of nobility across the continent. Just the sheer amount of money gathered by this house for its entertainment services now makes it a power of its own.