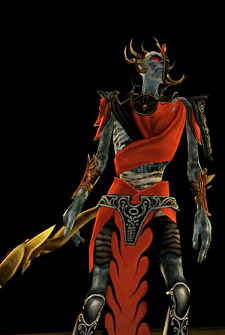 Description: The Black Abbot <Rising to Godhood> is the raid boss controlling The Necropolis area, eventually encountered in the Ascension Chamber raid. The Abbot was a male human before becoming a Lich.

Recommended Attacks to use against him[edit]

The Black Abbot is directly linked to the whole Necropolis storyline, and make some appearances in the game outside of his raids. Those are listed below in chronological order.

The Black Abbot's projection can be seen talking to Brother Salasso in his private room. Once you drop the barriers, you can heard the final words of this conversation:

Once you defeat Salasso, the Abbot will banter back:

The Black Abbot sent a letter to Annelisa Hdar, that you can read once you kill her:

You have outdone yourself, yet again. Blackhand proved a most capable servant to our cause and I shall not forget your service. Those self-righteous fools dare strike out against us. I can only laugh at their pathetic attempts at my destruction. The witch-hunter now knows the truth of the matter: all who oppose our cause must die, and in death join my legions. My servants gather and my power grows as the Dead Time draws near.

Shadow draws a veil across the land. My rise to ascension begins. May you fare well in the storm to come.

Orchard of the Macabre (epic)[edit]

You can find 12 journals around the Orchard written by the Abbot himself, telling what happened after his presumed destruction at the Ascension Chamber.