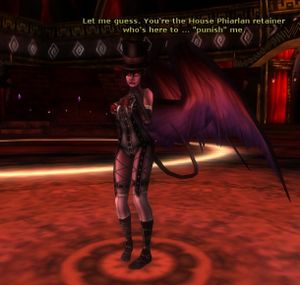 Description: Named Succubus encountered as final boss in Under the Big Top, Wrath of the Flame, and To Curse the Sky.

On Epic difficulty she has 68 AC (DDO Forums) which is one of the highest AC for a DDO monster. Destruction, Improved Destruction, Strength Sapping, Waves of Exhaustion and such debuffing is highly recommended.

On Epic difficulty, she has SR 36. Improved Shattermantle may help in landing Waves of Exhaustion, Bestow Curse and Crushing Despair.