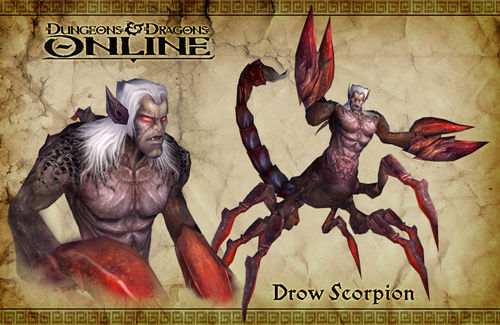 The drow scorpions (also known as scorrow) of Xen'drik worship an aspect of the Mockery that they call Vulkoor, and combine the mortification of the flesh popular amongst cults of the Mockery with primitive beast worship of arachnids - specifically scorpions. The scarification the devout undergo seems to be pleasing to the Mockery, and it is said that especially pious worshippers may be rewarded with transformation into a servitor of Vulkoor.

These servitors are a centaur-like hybrid of a giant scorpion and a drow. The torso of a drow emerges from the body of a scorpion, but pincers replace the arms. Reported abilities include a powerful constitution damaging poison and numerous spell-like abilities. If the reports from the drow are to be believed, most of these aberrations were presumably powerful clerics or wizards prior to their elevation in status, so it is wise to expect conventional spellcasting ability as well. **Keep in mind that even the basic Drow Scorpion can and will debuff you. They will remove some or all of your buffs. Not sure if this is through a sting or through a casting effect like dispel magic.

If you should ever encounter one of these creatures, take standard precautions against poisons and do what you can to capture it alive. The academy will pay a great deal for the chance to study one of these "scorpion drow" so their actual origins, strengths, and weaknesses can be properly determined.

Drow Scorpions can be virtually any class. Many divine and arcane spellcasting types exist, but also, fighters, barbarians, and rogues.