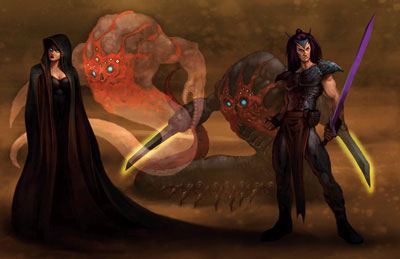 A Quori and his vessel

The Quori are evil outsiders from the Dal Quor, the Region of Dreams. Forty thousand years ago they succeeded in opening up the gates between Dal Quor and Eberron and nearly overran the world. It was only through the intervention of dragons who provided arcane technologies to the giants of Xen'Drik that the plane of Dal Quor was shunted away from its rotation so that it could never again become coterminous with the material plane.

Quori can take many forms. These include:

Note that the Dream Scourge and Dream Stealer are not undead and do not have any undead traits.

Quori spirits can possess humanoids, granting them additional powers but suborning their will. These are the Inspired.