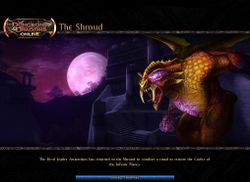 Arraetrikos is about to conduct a ritual that will re-compile the Codex of the Infinite Planes, giving the Devil leader power over Shavarath and any other Plane he choose to conquer. Gather allies, travel to the Shroud and stop the ritual before it is complete. 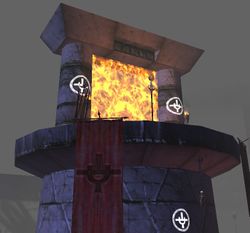 Phase 1 – The portals in phase one have a great deal more HP than you may be used to. They also have  ♦40Normal ♥80Hard ♠120?Elite unbypassable damage reduction, making proper weapon choice and high damage output per swing essential. Because of the enormous amount of HP per portal, this phase is by far the longest one and can be quite tedious. The risk of Portal Keepers spawning is much greater due to the extended time spent in this phase, so whoever is charged with killing the trash should aggressively take them out. The monsters that spawn from each portal progress from 4 troglodytes, to a devil (orthon, bezekira, or bearded devil), to a Portal Keeper. The Portal has to go through the entire spawn progression to get to the portal keeper, so killing any of the first two waves of spawns will start the progression over at the beginning. You can easily tell if one or more Portal Keepers are active by checking the top of the pillar where the first portal spawns (there will be a wall of flames). The trash is also much more lethal due to an increased spawn rate and large damage output (particularly by the bezekira, troglodyte sorcerers, and troglodyte assassins). There are now blade storms in this phase on both the upper and lower levels which on their circuits of the area will pause in front of each portal spawn point. Standing as close to each portal as possible should prevent the blade swarms from hitting you, but ranged characters should take care to avoid them while dpsing the portal. Take note that when each portal is destroyed it explodes, doing ~200–300 damage on LH and hitting you with Soul Drain, a 20 second curse making you immune to all healing. All characters should carry Remove Curse potions or the remove curse spell if they want to be able to heal themselves reliably.

Phase 2 – Again, the main difference between legendary and heroic phase 2 is the sheer amount of HP of both the lieutenants and the crystal. It is recommended that most groups assign at least two high DPS ranged characters to break the crystal to ensure that is can successfully be destroyed in one round. As in heroic, during the first round the lieutenants must be split to be killed, but after they've died once this is no longer the case.

Phase 3 – All players should be allowed to shrine and loot before opening the portal to phase 3, because the prismatic wall (touching it causes instant death) will spawn under a minute after the first player enters. If you plan to use a puzzle solver, you should also have it open and ready before entering. As on heroic, additional walls will spawn if this phase is not finished quickly. The wall initially spawns in the southwest corner of the map and moves in a clockwise directions, so it is recommended that players running water should also run clockwise. Be extra careful when following the prismatic wall around a corner, as it will go all the way into the leg of the corner facing it, then appear at the other leg of the corner (which may be behind you if you don't stay far enough back!) to travel down the next corridor.

Phase 4 – The biggest change in this phase is that Soul stones of players who die are no longer teleported to phase 5; therefore players can be raised from the dead while the fight is still in progress. The main danger in this phase is the healing gnolls that spawn if Arraetrikos is not killed during the first round of blades. The gnolls heal Arraetrikos much faster than on heroic, so on subsequent rounds the primary goal of the entire group should be to instakill them or otherwise take them out as quickly as possible before returning to dpsing Harry. This phase is currently the quickest and easiest phase of the raid.

Phase 5 – The entire raid group is no longer killed when the portal to phase 5 is opened. In fact, you no longer enter phase 5 by portal at all. Instead, each player must click on the book to enter. Start the fight by approaching the rakshasa Ta'ashveth. He will then summon Arraetrikos' four lieutenants: Carver, Fortis, Hathera the Erinyes, and Gur'noras the Slaad. Once the lieutenants have been defeated, a five minutes timer will begin during which Ta'ashveth will summon waves of monsters using the Codex. Each wave is randomly chosen from from the following planes: Fernia (fire giants, mephits, and fire elementals), Khyber (oozes and rust monsters), Limbo (slaad), Shavarath (devils), Eberron (drow), and Xoriat (tharaak hounds and beholders). Fifteen seconds after spawning, monsters still alive gain one of the various "Champion" buffs (though they do not appear to be able to drop remnants). All monsters in each wave must be killed before the next wave will spawn, so it is possible to kite/stone/dance/etc. one monster for the duration of that timer so that no more waves will spawn before the rakshasa activates. Once the five minutes are up Ta'ashveth will indicate that he is about to activate via DM text ("I see I have to write my own chapter", etc.). As he activates, he summons a wave of fire reavers and flesh renders. Once Ta'ashveth is killed, the Codex of Infinite Planes will come to life and must be killed. During this fight the Codex will summon more of the waves of monsters described above until it is dead. The raid completes when the Codex is destroyed.