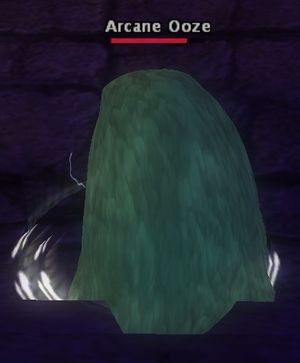 
Special Qualities: Immunity to magic and acid. Healed by acid.

Description: Arcane Ooze make spellcasters cower in fear due to their magic immunity and spell point draining abilities. It's wise to take along a melee to help you dispatch these durable green blobs. Disintegrate works well.

Immunity to Magic (Ex)
A creature with Immunity to Magic is immune to any spell or spell-like ability that allows spell resistance. In addition, certain spells and effects function differently against the creature, as noted below.

Unlike in PnP, most damage spells in DDO do not allow spell resistance. To combat this, creatures with Immunity to Magic instead have massive energy absorption. 50% Energy Absorption for all Energy types. This includes: Cold, Fire, Sonic, Electric, Light and even Force damage. This is new as of Update 9. Previously they were simply immune to all these damage types.