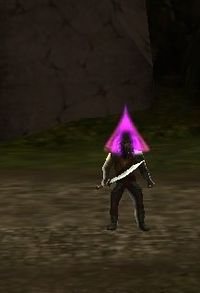 Influences the actions of an enemy, allowing you to suggest it to fight as your ally for 30+2 seconds per caster level. A successful will save negates this effect.

The creature will be unable to be attacked by Player Characters for the duration of the spell. Only creatures that know at least one language can be affected by Suggestion. Examples of creatures that know no languages are all Oozes, all Animals, and all non-living Constructs.

Creatures affected in this way will attack other hostile creatures in the immediate vicinity. The charmed creature will remain stationary if there are no enemies nearby, and will not follow the caster around. Unlike the Charm Monster spell, Suggestion does not allow periodic additional saves. Because of this, the creature will remain charmed until the duration expires or the caster leaves the instance.