Green Steel crafting, introduced with Module 6, is a way to create customized items using ingredients gathered in the Vale Explorer Area, the Vale quests, and The Shroud raid. In each of these areas, chests may contain Ingredient items, usually denoted with a Purple Background. All Green Steel ingredients can be gathered into Ingredient Bags.

For most of the crafting, access to Meridia, Tier 1 Favor with The Twelve (40 Favor), and completion of all 5 Pre-Raid quests in the Vale are required.

Getting ready for "Raid Loot" Crafting[edit]

One of the most prominent forms of Crafting in DDO is the "Raid Loot" system, which creates Green Steel Items. Green Steel Items are "blanks" that are manufactured, then upgraded through a series of crafting steps in The Shroud Raid area.

Preparing, or 'flagging', for the Shroud raid requires a few steps, outlined below. Without these you can't enter The Shroud.

You are now flagged for the Raid, and ready to start the real Crafting.

Ok, I am flagged for the Raid, Now what?[edit]

There are different Altars to use for different steps in the Crafting process. Underneath Meridia is the Altar of Fecundity. The Altar of Fecundity is used to combine the Ingredients collected in The Vale and the Pre-Raid Quests, as well as the Shavarath Stones, to create your Green Steel Item, or your "blank" to upgrade later. Within the Raid, there are 3 additional Altars, each of which use different Ingredients to further upgrade your Green Steel Item.

WARNING: You cannot equip more than one Green Steel Clothing Item at this time (Weapons do not count). Doing so will cause you to take 5d8 (5-40) damage every 2 seconds until you die. If you receive a Raise Dead, or Release your Soul, you will likely die almost immediately after coming back to life. This is due to the Taint of Shavarath on the item, which must be cleansed by an Essence of Cleansing. The Essence is only available as a 20th completion reward of the Raid. You can freely dual-wield weapons however, and wear a single clothing item before obtaining an Essence.

Each shard is used at the appropriate Altar. A Shard of Power is combined with the Manufactured Ingredients to create an Imbued Shard of Power.

Finally, combine your Imbued Shard of Power, a Shavarath Energy Cell and your Green Steel Item to add effects to your item.

Inside the Raid, the Crafting process is as follows:

Notes on how the upgrades work[edit]

Planning for your Crafted Item[edit] 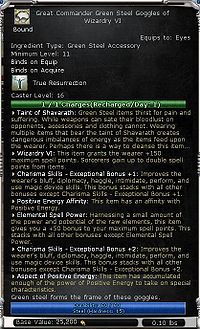 The best thing to do is to plan ahead and research what you want to upgrade. This is very important, as if you make a mistake while upgrading your Green Steel Item, you will NOT be able to fix it, thus getting stuck with a different effect.

So we first look at Altar of Fecundity - Manufactured Ingredient Recipes and work our way backwards. Green Steel Goggles require Filaments of Toil, Violet Taper, Wondrous Oil, Shavarath Signet Stone, and an Eberron Energy Cell. Some of the Tier 2 Recipes can be made more than one way, so there some items will have varying amounts needed… so we then look at Altar of Fecundity - Raw Ingredient Recipes to create our Ingredient List of:

Once these are all collected, go to the Altar of Fecundity underneath Meridia, and start combining your Raw Ingredients to create the required Manufactured Ingredients. Then take the Filaments of Toil, Violet Taper, and Wondrous Oil, along with your Shavarath Signet Stone and a Eberron Energy Cell, put them together, Mix Magically, and you will have your Green Steel Goggles.

Now, it is time to start running the Raid and collecting your Raw Ingredients for the 3 Altars. Positive/Escalation/Ethereal will require the following Ingredients:

Use these to create Inferior Focus of Positive Energy, Cloudy Gem of Escalation, and Diluted Ethereal Essence. Take these 3 Manufactured Ingredients, along with a Shard of Power and a Shavarath Low Energy Cell to imbue the Shard of Power with the Positive/Escalation/Ethereal mix. Then finally put the Imbued Shard of Power, a Shavarath Low Energy Cell, and your Green Steel Goggles in the Altar of Invasion, and they should now called Lieutenant Green Steel Goggles of Wizardry VI. Upon examination, it should have Wizardry VI, Charisma Skills - Exceptional Bonus +1, and Positive Energy Affinity.

The Shroud Phase 1 - Altar of Invasion[edit]

The Shroud Phase 3- Altar of Subjugation[edit]

The Shroud Phase 5 - Altar of Devastation[edit]