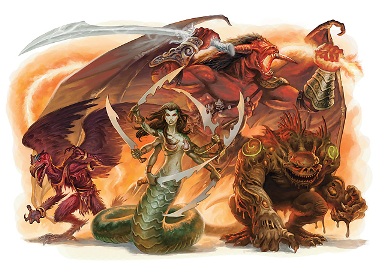 Demons are a race of creatures native to chaotic evil-aligned planes. Demons are ferocity personified and will attack any creature just for the sheer fun of it — even other demons. They are monsters of the Evil Outsider type. Tanar'ri is an AD&D 2nd Edition terminology, back then the game was accused of being "Satanic", so TSR, Inc. renamed it.

Most demons possess the following traits (unless otherwise noted in a creature’s entry).

Demons have many sub-races, with highly varied forms and characteristics. These include: