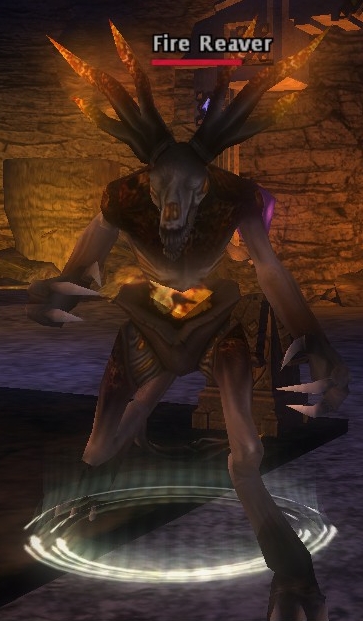 Fire Reavers are Evil Outsider type monsters. As all demons, they are always Chaotic Evil.

Of the twisted demons born of Xoriat's folly, there are none as masterful with the power of incineration as the fire reaver. A being of flame incarnate with a temperament to match, the creature is devoid of mercy, absent of pity, and filled only with a passion for reducing prey to ash. A crown of fiery protrusions jutt from its skull-like head, its clawed appendages are tipped with fiery embers, and its bowels burn from within like a maleficent bonfire, distinguishing the fire reaver from its demonic kin. It possesses the height, strength, and weight to cast down any opponents who dare stand in its presence.

Being in a fire reaver’s path is the first mistake of the inexperienced adventurer. Stand still too long and you’ll be set ablaze. A reaver has no need to be within arm’s length to dispatch you (other than delighting in dispersing your ashes with a frenzied rake). Fire reavers can release a flaming projection of its essence to wash over any foe directly in front of it, and those beyond such an attack are struck down with fire it calls from the sky. Protect your life with wards and magic protecting against fire, but don't call on flame to dispatch the demon – it IS fire! Instead, trust to cold damage if you have it available. Beware of the creature’s scorched hide, which helps to protect it from physical attacks. A blessed weapon forged out of cold iron is your best chance at cutting deeply enough to slay this beast.

Always be wary… both of the poisonous flaming claws and lashing tail, but also for the possibility that a fire reaver you face is not alone. Where there is one fire reaver, there are sure to be other demons or extra-planar creatures close at hand. Having a companion extremely skilled in the arts of banishment or dismissal could make the difference between life and death. However, don’t waste precious resources on such attempts unless the caster is powerful, for fire reavers are so resistant to spells they could possibly shrug off the attempt of a lesser caster. Expending magic needed for defense leaves you – and any of your allies—at the mercy of a walking inferno.