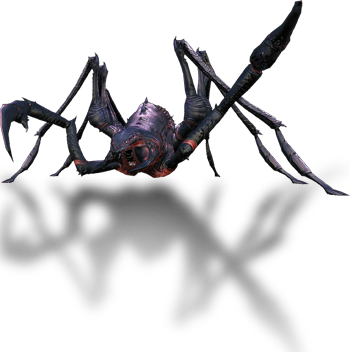 Bebiliths are enormous, predatory, arachnid demons that hunt other demons. Astoundingly aggressive and large, the Bebilith is a demonic spider who is known to attack anything on sight. Often used by Drow as a war Demon, this creature relies on its razor sharp claws and lethal venom to putrefy the flesh of foes!

Bebiliths are Evil Outsider type monsters. For being a demon, they are always Chaotic Evil.

A bebilith has a body the size of a plow horse, with legs spanning more than 14 feet. It weighs more than two tons.

A bebilith attacks any creature it sees. It usually picks one target and concentrates its attacks on that opponent. Should the bebilith become overwhelmed by tougher opponents, it slam its body against them in the tentative to knock them down.

A bebilith’s natural weapons are treated as chaotic-aligned and evil-aligned for the purpose of overcoming damage reduction.

Rend Armor: If a bebilith hits with a claw attack, it pulls apart any armor worn by its foe. You get -1 AC and -1% Fortification. This effect can stack multiple times.