First General Horoth ordered Genesis Point built as an underground base for the Devil's most secret military operations. 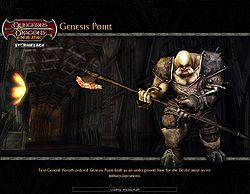 Sebi the Yugoloth has sent you to find Genesis Point, a Devil base on the surface of Shavarath. Once inside the base you are to contact a Yugoloth infiltrator, who will give you further instructions. (NPC dialog available here)

Genesis point is a military base for the Devils on Shavarath. Your job is to cripple one of the four functions of the base. If you read the information given by the Yugoloth at the beginning of the quest, he will give you the walkthrough of what you need to do, but I will streamline it here and give a few tips.

First off, you need to clear the upper level. Circle around the top level, traveling either north or east at the first intersection. I usually travel north first since you will end up heading back that ways afterwards.

Travel the circle, clearing out each of the four control centers. Each control center will have 3 waves of devils and tieflings, so be prepared for some fighting in each room. Crowd control spells and displacement can be a great benefit here. When the room is clear, pull the lever in the center of the room, the one in the red pit. There will still be a lever inside a blue forcefield, don't worry about that just yet.

There are also several controls in each control room. These levers will affect different things in the rooms below. For the most part you can ignore these controls at this point, with the exception of the levers which control the doors between the lower lever rooms. If you start to the north, use the lever on the north side of the western room. Below you will notice that this opens the large door leading to the north.

Continue to the north side of the circle, again clearing the 3 waves of devils, hit the center lever in the red pit, and open the door below which leads to the east.

The east side repeat again, clearing the 3 waves, hitting the lever in the red pit and then opening the door which connects south.

In the southern room clear as before and then hit the red pit lever. Do Not hit a lower door lever here, as you already have a clear path circling the lower level from east -> north -> west -> south. While you are here, hit the lever on the central control panel, as shown in this picture. This will turn off the blade traps in the maze on the lower level.

Continue on to complete the circle. A shrine will now be available in the main intersection. Shrine up if you want, then head north again. With all 4 control rooms clear and the 4 red-pit levers pulled, a portal and a chest will now be available in the western control room. Loot up and head on down. (You can always come back up through the portal, it isn't a one-way trip)

This portion (west lower level) is the crate storage of the Portal Bay. your job here is to kill everything and destroy the crates. Be careful, the crates contain extra bad guys. Once this is cleared out, head north through the door which you opened with the levers above.

Now you are in the outer area of the Detention Center (northern lower level) where prisoners are kept inside magical barriers. There are a lot of bad guys, mostly orthons and trolls, hiding throughout the holding pens. Work your way through and clear them out, then when it's clear, hit the levers on each of the 5 holding pens. This will allow the barriers to be lowered from the control room above (a step we will come back to). Once the room is clear and the levers all pulled, head east through the door that you had opened from above earlier.

This is the entrance to the Command Center (lower level east), currently being used by an elite troop for a pep rally. When you get close, the troop will come at you in waves. Take them out and then take out their commander. Loot the chest and shrine if needed. Clear the way south through the door that you had opened from above earlier.

You are now in the power conduit area which is before the Magical Channeling Center, it is protected by a maze with blade traps (which we turned off earlier.) The maze requires at least one person to move through and at least one person to hit levers in the control room above. You now need to split your group, sending a group of people back around the way you came all the way back to and through the western portal to go back to the upper levels. This group needs to be able to handle small groups of respawning orthons. Once this group is back to the upper level, they should travel south to the level above the maze. The person in the maze is trying to reach the middle of the maze, where there is a vial of water and a book. There is also a big pillar of magical energy. Don't touch the font of pure magical energy, you will explode. The group above will need to hit valves to lower barriers to the middle. Once water is placed on the book it will lower all the barriers in the maze, allowing everyone to move through the maze to get the two chests (one chest in the middle, and another randomly placed somewhere in the maze.

When the prisoners are all released, this should complete your four strategic objectives. When all four are completed the group will all be teleported from wherever they are to be in a small security chamber with a ranking barbazu. Defeat the Barbazu and his minions, grab some loot, and then head back out through the portal. Note: If you happen to be exploded by the massive current of magical energy in the maze area, this is where you Soul Stone will be blown to. Luckily, there is a resurrection shrine in here.

Strike one of the four strategic objectives on the Secure Level

Now you will notice that the big blue barrier around the center lever is lowered. Don't hit it just yet. This is where you make your choice of which strategic point you want to take out. (Which optional ending do you want?) Choose an ending from the four options (listed below), by moving to the corresponding control room on the top level and hitting the main lever which is now available. Then head to the lower level. There is a chest in the north area and if you haven't looted the ones in the south, there are 2 in the maze area. After looting, move to the secure area that you chose above.

Notes: Note on killing xp bonuses: These figures are only valid if you select the east wing ending – as all other endings reset the current bonuses and require killing an incredible amount of respawns to get anything, as such the east wing tends to be the fastest XP/min wing if you do kill everything.