The Devils' Third Legion was instrumental in crushing the Archon Host during First General Horoth's rise to power. 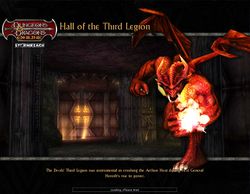 Barnzidu, the Devil Evoker, is preparing to open a new portal from Shavarath to Xen'drik. If he succeeds, the Devils' Third Legion stands ready to attack. The Yugoloth Nomti wants you to enter Devil territory and breach the Hall of the Third Legion. Once there, you are to find Barnzidu and eliminate him before he finishes opening the portal.

Walkthrough from Shade: An underground maze with four levels, with the ritual chamber on the bottom. You must find a portal or drop-down point on each level in order to proceed to the next.

One of the more challenging quests due to the end fight. Recommend you take a caster for the quest itself due to many air elementals flying around, as it is best to instakill them to save melees from the frustration of no-save whirlwind effects. Otherwise most any group can work, just some standard melee DPS is needed, nothing that tough. Quest is mostly straightforward – run around 3 semi random levels finding either a hole or a portal to go down 1 level, and a boss fight at the end. At the 2nd level you'll find many prisoners behind locked doors, freeing all of them will result in a lot of exp, so if you have a rogue and move quickly it can be worthwhile. Most doors can be easily knocked, but some are harder and may require lock-picking or a extremely high Knock DC.

Boss Fight: You may or may not get a shrine right next to the final hole to the boss fight (depends on the random instance you get), so try to save the other shrine that is always on this level if you're worried about SP, or save the one at the start if you're on normal/hard, as a portal appears to return to and from the start at the end. (The portal does not appear on elite) The locked chest next to the hole to the final boss can contain a Mysterious Artifact! So it's possible to get your boot part here without actually completing the quest.

Recommended way to do in a PUG is use a smaller group. If you have a full group of 6 people, it's actually easier to have some stay up above. Just take 1 to 3 people maximum. Generally 1 melee plus 1 cleric works well, though 2 melee or 2 clerics can work if all are fast and can stay close together. The hardest part about this is the traps (which can't be disabled). How they work: 6 tiles, with 6 time-delayed traps. The center is permanently trapped. The traps work on a simple time delay. The moment anyone touches a tile – a trap will charge up, it takes about 3 seconds for it to appear (it looks like a portal), and will go off within 3 more seconds, so you can only remain on 1 tile for 5 seconds at a time. Else this happens: 18 second curse called soul drain – makes you immune to healing, can be removed by remove curse. Also the trap deals 20–40 untyped damage – no save, and may hit multiple times at once (up to 10+ times sometimes, dealing 200+ damage) Note: Not only party members set off the traps, summons and even Soul Stones will too! So be sure not to use summons, and pick up any Soul stones of dead party members.

Basic Strategy: Drop down fully buffed, no Feather Fall so you get down at the same time (ramps will modify Feather Falling speed causing poor timing) Melee gets pit fiend aggro, moves down to a tile. Cleric stay very close by on the same tile. Try to kill trash while holding aggro. Fight 2–4 seconds on 1 tile, then move clockwise to the next tile in unison. Never stay still for long or the trap will hit you. Continue to move and DPS and it should be good as long as you do not get hit by the trap.

Alternative method such as a ranged DPS kiting or even casters with blade barrier/polar ray/acid fog/ball lightning will work too. But will generally take much longer then melee.

On Elite runs, one possible strategy is to send a caster and a favored soul together. Caster can clear the devils and the one air elemental (which is only present on elite) while FvS can cast Divine Punishment and kite (Note Barnzidu is now immune to blade barrier on elite). This method can be easier since Favored Soul wings work while chained, and chains on elite are extremely devastating. It's still quite possible to do it with rangers or melee though.