Six Brigadiers of the Devil army have their quarters in this citadel close to the Archon front lines. According to rumor disloyal Devil troops are also sent here for punishment. 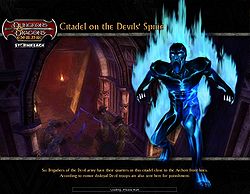 Wakhakwi in Amrath has tasked you to assassinate one of the six Brigadiers in the citadel atop the Devils' Spine. 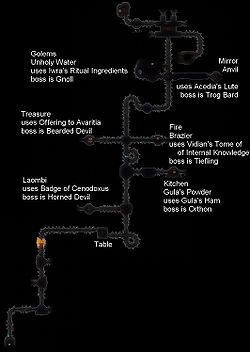 Alternate map for Sins of Attrition
Spoiler Warning: Information below this point can be considered spoiler material!

Walkthrough from Shade:
Very tough quest for pugs and newer players due to the trash mob setup. The end boss itself can be extremely easy compared to other quests (depending on the item you select and if you do the optional) – and can be made even easier by "discovering the weakness" objective (depending on the item you select – you have to do a different optional room to discover the weakness)
What's hard is that almost every encounter involves 5–15 devils at once, requiring some very heavy CC/Healing/DPS to live through each one without deaths. Take appropriate resources for that. There is really no easy way to avoid them or pull them apart as they are statues that only trigger once someone runs up, and will teleport over to attack all other party members – even at the very start of the quest! (some more advanced and complicated tactics like using invisibility/stealth can limit the encounter size, but this is rarely necessary in a group)
Recommended Party Setup:

2 others perhaps, though going with 4 should be fine due to scaling tech on normal.

It also has several random chests, seems to be 3 per run, which are random regardless of what item was selected.
Which optional you can complete and which end fight you get will vary depending on what item you select.
What the items do exactly and a rough idea on overall difficulty:

Note on optionals: Pretty much all the optionals involve you simply killing a few monsters and handing in the item. For each of these, if there is a random chest (not dependent on what you selected) it will unlocked after you complete the optional. Except 1:
The Badge/Bearded Devil optional (first side area on the left) He has several dialog options... Oddly succeeding on most of them will result in him surrendering and then teleporting away, and the chest will remained locked. One way of getting the chest is to fail his intimidate check and then kill him, another way is to choose the middle dialogue option (the one without a skill check) and then kill him. I think regardless of what you do here, the end boss will be weakened. Note if you don't have the crest and the chest is there, you simply cannot get the chest. Thus the only way to ensure you get 100% chests every run is to take the badge and thus risk running into a slightly tougher boss than the others.

Near the end of Sins of Attrition, you will come to a lever with two prisoners chained to it. If you free the prisoners, you get a bonus chest in the boss room. If you pull the lever and kill them, you immediately get a shrine.

There are six items to choose from the table, all based on the "Seven Deadly Sins" (Wikipedia article). Luxuria is excluded for some reason!