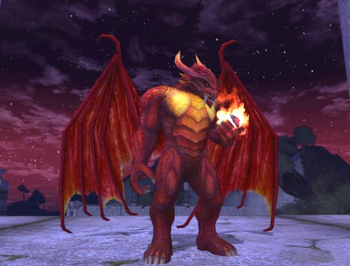 Pit Fiends are Evil Outsider type monsters. As all devils, they are always Lawful Evil.

A pit fiend often wraps its wings around itself like a grotesque cloak, and appears wreathed in flames. A pit fiend is 12 feet tall and weighs 800 pounds.

Pit fiends are wily and resourceful fighters, using invisibility to gain the upper hand and biting at foes seemingly able to see them. They don’t hesitate to blanket an area with delayed blast fireballs, and can call down the wrath of an inferno with meteor swarm.

A pit fiend’s natural weapons, as well as any weapons it wields, are treated as evil-aligned and lawful-aligned for the purpose of overcoming damage reduction.

A creature struck by a pit fiend’s claw attack are infected with a vile poison that can instantly kill you if it is not removed after a short time.

Twice per day a pit fiend can automatically summon 2 lemures, bone devils, or bearded devils, or 1 erinyes, horned devil, or ice devil. This ability is the equivalent of an 8th-level spell.