The Church of the Silver Flame maintains a Sanctuary for the insane within the boundaries of Stormreach's Market ward.
Stormreach denizens refer to it as "The Catacombs"

The Catacombs is an area found on the eastern part of The Marketplace, by the fountain near the entrance to House Cannith. 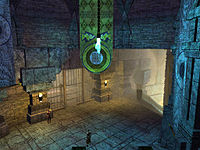 It is best known for housing a series of 8 quests that make up a story arc most commonly referred to as "The Catacombs", from the name of the zone that contains all of the quests. The first seven of the quests are base Level 3 with a Level 4 end-quest, so this is often one of the first story arcs done when entering the Marketplace.

While working through this story arc, you'll complete a couple of chapters along the way. When you complete a chapter, you'll be given a reward from Archbishop Dryden or Thaddeus Graylight and receive the next quest in the story arc. Many a team has been slowed down due to having to repeat portions of the story arc because someone didn't advance the story properly.

Since Update 45, the quests are now available on epic difficulty (level 23).

The Catacombs story arc can be begun by talking to Friar Renau in the far eastern part of the Marketplace. Below are more details about the quests that make up the story arc.

Enter the sanctuary and search for Marguerite Dryden, or any evidence of what has become of her.

Archbishop Dryden sends you to look for any survivors in the Catacombs.

Chapter 2: Return to the Sanctuary

Thaddeus Graylight sends you to gather more information about "The Duality."

Chapter 1: The Old Archives
Chapter 2: The Crypt of Gerard Dryden

Thaddeus Graylight sends you to set up wards against the undead.

Friar Renau in the Marketplace offers the end reward. Since Update 45, this no longer includes any named loot, just random items.