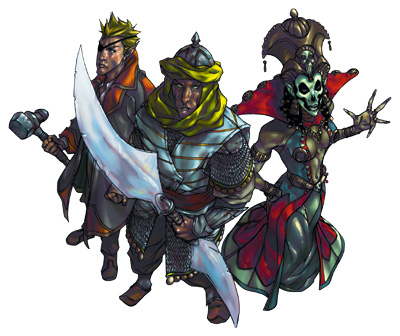 Approximately 39,000 years ago, elves were slaves to the Giants of the Xen'drik continent. After a war with invaders from the Plane of Dal Quor nearly ruined the Giant's civilization and wrecked the continent, the elves rose up in rebellion against the giants. An elf by the name of Aeren had a vision of the future, showing that this rebellion could only end in chaos and disaster. So, she gathered as many elves as would follow her and fled Xen'drik, landing on an island continent in the Thunder Sea. Aeren did not survive the voyage, and the elves new home was named Aerenal (Aeren's Rest) in her honor. This migration split the elves into two groups; the Drow Elf race who stayed behind on Xen'drik, and the Aereni who migrated to Aerenal.

Most elves stand between 5-1/2 to 6-1/2 feet tall and typically weigh a minimalist 95 and 135 pounds, with only marginal differences between men and women. Neither males nor females grow any facial or body hair (exempting hair grown on the head). An elf is considered an adult about 110 years old, and can often live to be well over 700 years old. Elves are often discerned from their widely-recognized large, pointed ears; usually slender limbs or body; slanted, slightly cat-like dark-green/grey eyes (the former being the most common); the sharpness and frailness of bones on their body such as the chin; and finally the uncanny fairness and grace every elf seems to possess.

Note that in game terms, DDO only distinguishes between "Drow" and all other "Elves", grouping all other sub-races together.