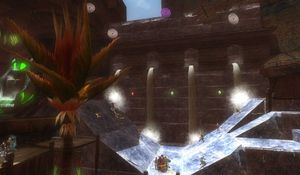 Note: the top of the pillar in Bogwater Tavern is no-longer accessible (invisible barrier blocks you getting there via air jet and any characters left parked up there are teleported down when they log in). This page needs lots of editing.

This is held in an Bogwater Tavern in House Phiarlan.

There are 4 runes on the ice: 2 on the left with buttons, 1 on the right with a button, and 1 in the center without a button. It is easier to NOT use ice skates here. You need (at least) 1 person for each of the 3 buttons, and 1 person standing on the center rune. When all 3 buttons are pressed simultaneously, an air jet will go off at the center rune, blowing that person into the air to (1) get coins or (2) land on the high pillar to the left.

The only reliable way to do this is to have 2 people with featherfall standing above each of the 3 runes, and have all 6 of them jump onto the runes at the same moment. Use 2 at each rune for a higher chance of success. Ignore the fact that you can keep the runes' lights lit up for longer by having people slide around/fall-over on the runes: this doesn't help at all, since having the 3 lights lit at the same time won't turn on the jet. Only hitting the 3 runes at the same time will fire the jet; pressing and holding one then the others won't help.

The air jet sends you in a direction according to where on the rune you were standing. Slightly forward from exact center on the rune might be best. If you land on the pillar, you can (A) jump down with Feather Fall to grab the purple coin or (B) buy and use a Greater Bracelet of Friendship from the DDO Store to get up to 11 other people up there at a time.

If you are using a bracelet to get teleported onto the pillar: