Collectables are found either in treasure bags dropped by creatures you kill or from collectable devices (e.g. bookcases, mushrooms) you find in the quest landscape.

Collectables come in sets of three, each item of a different rarity, desired by a particular collector. Collectables are also crucial elements of Cannith crafting recipes.

Creatures of a given type drop the same set every time. For example giant type creatures always drop talismans (like Amulet of the Lost Empire) throughout the game.

Each collectable set includes one common item, one uncommon item, and one rare item. For example, the religious icon set consists of String of Prayer Beads (common), Small Wooden Idol (uncommon), and Icon of Khyber (rare). The chance of each rarity being dropped is:

Collectable devices drop collectable sets based on the level tier of the quest in which they are found.

Treasure bags are unaffected by tier.

See: Collectables by tier and device. 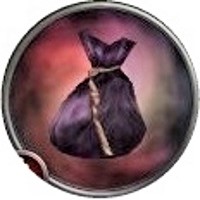 Treasure Bags are small purple bags which randomly drop from enemies when they die. When a Treasure Bag drops, all members in a group are able to pick up the same bag. A Treasure Bag disappears from your sight once you pick it up, but other group members who haven't picked it up yet can still see it and pick it up for themselves.

A Treasure Bag vanishes from sight after 10 minutes if you don't pick it up.

In regular quests, Treasure Bags contain Collectables which can be turned in for consumables and augments across Stormreach through Collector NPCs. These Collectors are indicated on city maps as blue circles grouped as a triangle. Items from Treasure Bags are also used in Cannith Crafting, and as such, can be valued by players and sold in the Auction House for inflated amounts.