This page is about the mechanic that limits chest and quest reward loot. For the quest XP bonus from breaking objects, see Experience points. 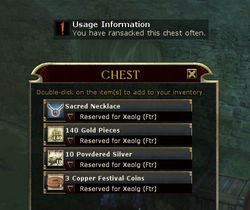 "You have ransacked this chest often." 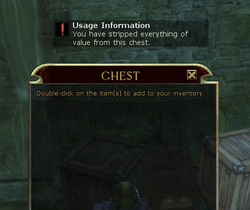 "You have stripped everything of value from this chest."

Looting a chest too often within a certain span of time can temporarily reduce the quality and amount of treasure that chest generates for you. This is to prevent players from farming the same chest over and over, especially chests that certain builds can reach quickly and chests that contain highly sought named items.

When a chest is opened: if there is no active chest timer for that chest, it generates normal loot for you and the game starts a secret timer that lasts exactly 7 days (168 hours), right down to the minute.

The ransack timer counts down even through game updates and server outages. Once it runs out, that chest refreshes completely. It'll provide full loot and start the timer again the next time it's freshly opened.

Chest ransack is reset by any form of reincarnation (including lesser).

Update 58 introduced a new gameplay option: Show Detailed Chest Information (Default: false). While true, the first time you touch a chest (and generate its loot) the chest will print out some information about its ransack info into your chat log. Only you can see this info.

While the act of re-rolling does not count towards ransack penalty, you will continue to accrue ransack as you normally would for repeated runs. Re-rolling a ransacked chest will result in the loot quality of the re-roll being equivalent to the standard chest ransack thresholds. [[1]]

Due to the way the ransack mechanic works, if you close and reopen a chest, it shows you the message you would get from your next looting, not the current one. So if you get no message on your first opening, but reopening it gives you a ransack warning, you know you just got your 8th and last set of normal loot this period and your next run will be penalized unless you wait the timer out. This is an easy way to know if you will soon be ransacked without keeping track.

Opening a chest repeatedly in one quest does not advance your ransack count extra times. This has been confirmed by a developer, and tested (link).

What still drops after ransacking?[edit]

"You have completed this quest frequently."

"You have completed this quest too often recently and receive no reward."

Quest end rewards can be "ransacked" as well, with a similar mechanic.