Litany of the Dead Part 4

Litany of the Dead Part 4 (or Accursed Ascension) is a story arc given out in the Necropolis.

This pack includes wilderness adventure area Orchard of the Macabre, chests from that area (also chests in quests) can drop:

Litany of The Dead Part 4[edit]

Litany of the Dead Part 4 (or Accursed Ascension) is a story arc given out in the Necropolis. 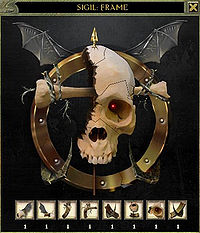 Speaking to Sir Rohine Stiedra in the upper necropolis will provide you with an empty Sigil: Frame and begin your Litany of the Dead Part 4 story arc in order to gain access to the pre-raid Litany of the Dead which in turn upon completing all four optionals (completing the quest four times) will give you the Abbot raid, Ascension Chamber.

You must gather 8 pieces of the Sigil: Frame, numbered left to right, through these quests to gain access to pre-raid.

Starting in Update 13, you have a chance of finding any piece in the Heroic Orchard of the Macabre explorer area rare chests but the highest chances of obtaining all sigil pieces is by running the quests above.

Starting in Update 37 Patch 2 Sir Rohine Stiedra will exchange a Sigil: Frame with at least one of each piece of the Sigil for a permanent Completed Sigil. This will allow flagging for Litany of the Dead after a True or Iconic Reincarnation without the need to collect Sigil pieces again.

Litany of the Dead

You must defeat 4 named bosses in this quest to gain access to the Black Abbot raid. You must repeat this quest at least 4 times as the path to the bosses splits in the middle of this quest.

In addition to defeating each boss you must exit via the door behind each boss and destroy the four control crystals to be considered flagged.

The entrance for this quest is located in the Necropolis, NW of Sir Rohine's position. Hover-text for the quest entrance on your map will be "The Black Mausoleum".

The Mark of Death raid[edit]

The Mark of Death