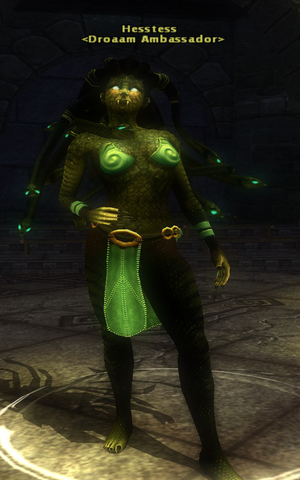 Description: Hesstess is the ambassador sent by the Daughters of Sora Kell from Droaam to negotiate with the Coin Lords. Before a player is bestowed the first quest in the Attack on Stormreach story arc, Diplomatic Impunity, Hesstess can be found negotiating with Delera Omaren IV and other Coin Lords in the Lordsmarch Palace. She disappear from the palace as soon as you finish the Eyes of Stone quest, or skip the first chain to start running Attack on Stormreach. She is replaced by a common kobold with a lot of HP, that can be used as a training dummy.

When you first enter the palace, she is talking with the other Coin Lords, as an ambassador of Droaam:

Trivia - Upon introduction of Lordsmarch Plaza quests, Hesstess had a different model (or texture), which is displayed on Eyes of Stone loading screen still.

I hope you understand that you are too late. Even now the Droaam army approaches the city. But no matter .... You'll make a fine addition to my statuary collection! 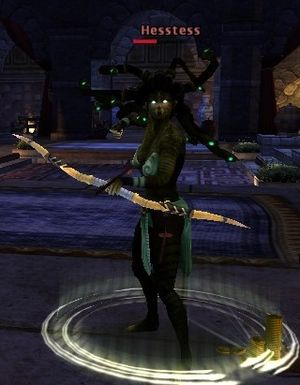 
Description: Hesstess primarily attacks with a longbow, but also does a form of magic attack. Her specialized attack is typical of a Medusa: A Flesh to Stone gaze that will petrify a player character for several seconds until they complete a saving throw. Hesstess, as with all Medusa, is a monstrous humanoid but with no known damage reductions. A Monstrous Humanoid bane weapon should be effective in attacking her.