Location of Wheloon in Cormyr, as seen on in-game map

The Wheloon docks were once a thriving river port. Now the town's waterfront serves as the entryway to the famed, feared Wheloon Prison.

Wheloon was a small city in Cormyr, situated (mainly) on the western bank of the Wyvernflow river. It is situated approximately 120 miles to the South East of Eveningstar. Following the death of Mystra and the Spellplague (in 4th edition era Forgotten Realms), Wheloon was transformed into a walled prison city, becoming a dumping ground for suspected Shar worshippers, Netherese spies & sympathizers and others who'd offended the Cormyrean rulers, as well as the Wheloon natives also trapped inside.
Wheloon, as seen in DDO, is now a magically walled prison, with the Wheloon Docks remaining outside the city walls.
See the FR wiki entry for more details and the city's entire history in PnP settings. 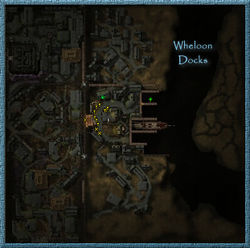 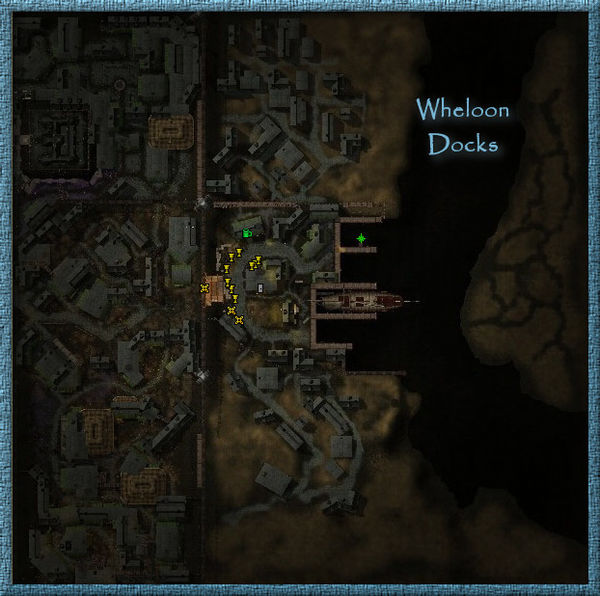 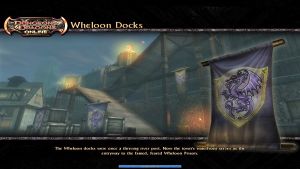 Wheloon Docks is a public area introduced in Update 19 as part of the Shadowfell Conspiracy expansion, as the hub for the Shadow Over Wheloon story arc.
The public area is accessible via the ferry by the wharf on the Starwater river in the North West of Eveningstar. How the ferry manages to bypass the bridge across the river on the southern side of Eveningstar is a mystery that may never be solved.

These quest givers are located next to the central building in Wheloon Docks and can also be found in the North West of Eveningstar on the slope leading down to the wharf:

The story-arc givers are located on the Western side of the Wheloon Docks public area, opposite the Disciples of Shadow quest givers, and can also be found on the wharf in the North West of Eveningstar:

These quest givers are located on the Western side of the Wheloon Docks public area, in a line running from North to South:

The teleportation liaisons are located on the Western side of the Wheloon Docks public area, to the South of the quest givers:

The Ball and Chain Tavern[edit]

The Ball and Chain Garret, where Iconic Heroes (excluding Bladeforged) start their lives is located upstairs from the Tavern, but cannot be accessed after characters leave it following character creation.

This is a Level 15 (Heroic) / Level 25 (Epic) wilderness adventure area, accessible from the Wheloon Docks. See the Wheloon Prison page for details.
The "prison city" concept is the same idea that was used in John Carpenter’s 1981 cult classic "Escape from New York" (Wikipedia) and its 1996 sequel "Escape from L.A." (Wikipedia).
The developers have included references to the film within the game (see References in DDO for details **work in progress**).

An unnatural darkness looms over the prison city of Wheloon as shadows spread across the land. Uncover the sinister Shar plot threatening to destroy Cormyr from within. Take to the sprawling city streets and rooftops of Wheloon as you hunt down Netherese agents seeking to forge an army. A shadowy maze where even the Purple Dragon Knights will not tread, this prison city will put you to the test!
This is the main story arc that takes place in Wheloon Prison. See the Shadow Over Wheloon page for the quest list and details.