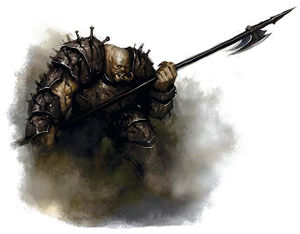 Orthons are foot soldiers in Hell’s armies. Though specialized in killing demons, they are equally dangerous against mortal foes.

Orthons are Evil Outsider type monsters. As all devils, they are always Lawful Evil.

This hulking fiend is covered in metal plates bolted directly to its flesh. The nails that fix the plates in place drip black blood that stains armor and body alike. The creature has monstrous features, twisted in pain but filled with a primal cunning. Rotten tusks sprout from its lower jaw and maggots wriggle in its wounds.

An orthon’s natural weapons, as well as any weapons it wields, are treated as evil-aligned and lawful-aligned for the purpose of overcoming damage reduction.