Long ago, say the legends, a hero dared to oppose the cruel reign of King Raiyum. His remains are turned to dust, his crypt defiled, his true deeds forgotten.

While exploring the Menechtarun, you located the Fallen Shrine. Legend has it that the Wizard-King Raiyum corrupted a great champion to his cause and ultimately entombed him here, in the embrace of the demons and outsiders whose powers Raiyum commanded. Search the shrine for the champion's burial chamber and the treasure it must contain.

An outsider killing fest, work your way through the one-way temple, killing off the demons and their friends. Light the torches as you go, and watch the alcoves for the shrine and chest.

When you do get to a crossroad, pick either way, they circle around and meet. Fight your way to the end, talk to the ghost and fight the wraith. Grab your loot and head back to Zawabi's Refuge for your reward. 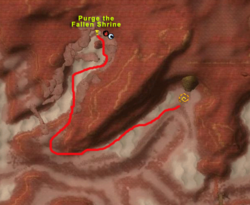