Kourush the Astrologer was Raiyum's chief advisor. When the Wizard-King passed on, Kourush was entombed to serve him in the afterlife.

When exploring the Menechtarun, you located the Tomb of the Astrologer. Legend has it that Kourush the Astrologer was murdered and buried by the Wizard-King, Raiyum, at the same time that Raiyum himself achieved lich-hood. Search the tomb for Kourush's burial chamber and the treasures it must hold. 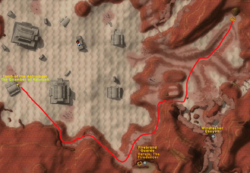