Mythic Boost is available in the magnitude +1 to +4. Higher bonuses drop more frequently on higher difficulties.

Unlike most bonus types, all sources of Mythic bonus stack. 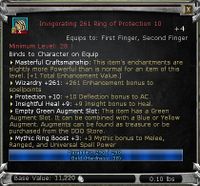