Litany of the Dead Part 2

Litany of The Dead Part 2 is a story arc given out in The Necropolis. The story arc consists of five main quests.

Litany of The Dead Part 2[edit] 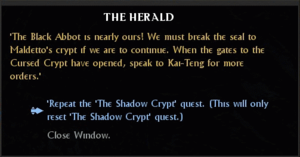 Misleading dialog with The Herald to rerun Shadow Crypt - selecting this can reset all Necro 2 quests!

If you talk to the Herald after completing the Shadow Crypt in order to rerun the quest, doing so will also reset all four flagging quests. To rerun Shadow Crypt without repeating all four Shadow Tomb quests (DDO Forums*):

Scarabs are acquired in the end chest of each quest. Combine the following 5 items in the Stone of Change:

This will make a Dark Scarab Powder that needs to be turned in to Squire Rale in the Necropolis for any one of the following: