Through careful use of their abilities, monks can unlock special finishing moves to perform amazing effects. This button changes into various finishing moves as they become available.

Finishing moves, as the name suggests, close a sequence of moves with a spectacular finish. Unique to the Monk class, some finishing moves inflict damage, others heal, buff friends, or debuff enemies.

Finishing moves are active feats. Monks are able to chain together 3 ki attacks to unlock a finishing move, depending on the combination. Ki attacks are given to a Monk at level 1 and later levels, as well as obtained by spending action points on relevant enhancements (see Monk enhancements). Ki attacks are also granted as feats themselves as a Monk levels up (Void Strike is an example).

After character creation, you will have a hotbar icon for finishing moves, which uses the Monk class symbol, a generic icon. When you have successfully chained together 3 special ki attack combinations without interrupting the combo cycle, the generic icon is replaced with a new icon that specifically represents the finishing move which is available as a result of your combo. 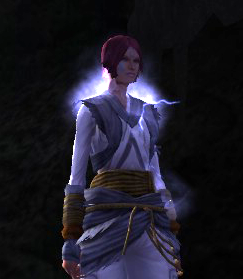 Your body shows and makes sounds of electrical arcing on successful preparation of a finishing move. Other players cannot see this effect.

For example, prior to performing any special attack combinations, the finishing move icon on your hotbar will look like this:

After chaining together 3 valid ki attacks, your finishing move icon will change to something like this:

The actual icon image will vary depending on which combination you execute. In the above example, the combination to produce a "Healing Ki" finishing move is used. As well, from the player's view (but invisible to all others), your character shows an electric-surging effect around the upper body, confirming that you have completed a finishing move that awaits you to discharge it.

The special attacks required to perform the charging strikes cost a varying amount of ki, and the finishing move itself costs Ki as well. Until you have a sufficient reserve of stored ki, younger Monks often won't have enough ki to trigger the ki before performing an action that usually aborts the chain.

Using Healing Ki as an example again, the three Fists of Light strikes (which do not need to be aimed at an enemy) cost 10 ki each. To activate the three strikes, another 10 ki is needed for the finisher, bringing the total needed for the complete move to 40 ki.

See the Ki article on how to pool and generate more ki.

Many actions a player would normally engage in during combat or downtime can disrupt the execution of a finishing move chain or reset a prepared but un-used finishing move. When attempting to setup a finishing move combo you are only allowed to perform a regular attack (manual or auto), move your character about, and execute valid special ki attacks that are not elements used in other finishing moves (such as Stunning Fist). Any other action(s) disrupt the combo chain, consume the ki used in attempting the combo, and force you to start over. Tactical attacks such as Sap, Trip, Stunning Blow and Sunder do not interrupt the building of a combo.

For example: You require 3 special ki attacks to be used before unlocking your desired finishing move. You have performed 2 special attacks already, so one more special attack is needed to unlock the finishing move. But performing any of the actions below will reset the combo chain, where you must start the whole sequence over:

Meditating does NOT break or reset finishing move combos.

The above list is not meant to be exhaustive, but gives you a taste for what actions may short-circuit your ability to unlock and use a finishing move (or use an finishing move that has been unlocked and is awaiting use). The rule of thumb should be that if you are not normally moving or attacking a target or executing special attacks, you are likely resetting your combo chain.

At this time, there appears to be no limit to how much time may pass between executing ki attacks. There also appears to be no time limit on how long a prepared finishing move may remain in a ready state, provided an action that cancels the combo is not performed. This can be advantageous as regular attacks and non-combo ki attacks can be performed while a ready-state is still in effect. You cannot chain ready-states, however (that is, perform a combo and attain a finishing move charge, then perform a second combo and create a second charge to use in succession). It can be useful to set up a finishing move ahead of time if you know your excess ki will dissipate before you can use it, or if you'll need to Meditate to build your ki back up (wishing to cast Walk of the Sun right before a big battle, for example).

Finishing moves are based on combinations of the elemental ki attacks Monks receive at level 1, as well as from action points ranking in a given discipline and the ki attacks granted as a result of your Philosophy choice. As such, the combinations are based on these types: Air, Earth, Fire, Water, Void, Light and Dark energy.

The list below outlines the Finishing Moves as of Update 8. They appear to come in 3 basic combination flavors:

The saving throws for monk abilities have a DC of 10 + monk level + wisdom modifier, unless otherwise mentioned. They are mostly Fortitude saves. Note: The finishers also seem to benefit from stunning bonuses.

All finishing moves deal +1[w] damage on their attack.

The bug that allowed Metamagic feats to apply to finishing moves has been fixed with Module 7 patch 1. (This allowed Empower Healing and similar spells to magnify finishing move effects.) However, item effects such as Potency, Devotion, Combustion affect finishing moves (particularly to Healing Ki) and operate as intended by the developers DDO Forums.

Note that ki attacks do NOT have to be directed at an enemy to count - you can do three Fire attacks in the middle of an empty hallway, then charge around a corner and unleash the Breath of the Fire Dragon upon a group of enemies.

Here are the known finishing moves, grouped loosely by the basic combination:

Wait...what? I see both paths in my character sheet![edit]

Thus, a monk will only be eligible to execute moves related to their philosophy as they are eligible for later enhancements or feats. For instance, at level 10, monks will be granted both the Moment of Clarity and Curse of the Void finishing move feats. However, you can use only one of the two feats, based on your philosophy, as these feats require either Fists of Light or Fists of Darkness, and you'll possess only one of these two feats.

Look carefully in your Feats list and you will find either a Fists of Light or Fists of Darkness attack to determine what attacks you can do. (Drag the one you find to your toolbar to use it—as with all monk special moves, the attack is not placed there automatically.)

The Henshin Tier 5 Balance in Dawn enhancement grants a strike opposite to the path chosen at level 3. This strike qualifies as a Dark or Light move, enabling a Henshin monk with Balance in Dawn to build every finishing move available for their monk level. Care should be taken not to build opposing philosophy finishers using the same element in rapid succession, as the second attempt will fizzle. Rapidly building and executing a Pain Touch and Walk of the Sun pair of combos back to back will be fine, but a Freezing the Lifeblood attempt will fail if a Dance of Clouds combo was just completed.

Unlike elemental strikes that can be rapidly chained together by using Adept, Master or Grandmaster flavors that have their own cooldown timers, pure philosophy finishers require waiting for the cooldown on Fists of Light or Fists of Darkness for three straight strikes. This obviously precludes the use of any other monk strikes while building the finisher. Before the enhancement pass, Lightside monks could count Shintao strikes like Jade Prison or Smite Evil as a Light move, decreasing the time it took to build the Healing Ki finisher. Likewise, Touch of Death and Shadow Veil counted as Dark moves, decreasing the time it took to build Touch of Despair.

Differences in Finishing Moves between Light and Dark Monks[edit]

All dark Monk finishing moves use the Finishing Move activator as an actual attack, and require a target. All light Monk finishing moves use the Finishing Move activator as a non-attack move (the monk briefly brings their hands together in a prayer-like movement to complete), and no target is required. Targeting a nearby ally, however, will center the effect on him, rather than the Monk. Most elemental finishing moves, as well as Shining Star, are attacks and require a target. The Breath of the Fire Dragon (which emulates Burning Hands) is a short-range attack where a cone of fire is ejected from where the Monk faces.