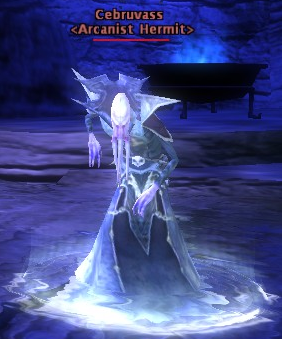 Habitat: The Land of Barovia — accessed by being teleported to the lair through the Mysterious Mist

At 2/3 of his health, and again at 1/3, Cebruvass will summon a number of Animated Arms.

Cebruvass can be a little tricky to find - unlike some patches of mist, which have fixed locations and destinations, the patch of mist that takes you to him is randomly located (if it spawns at all). One known location is en route to Berez, where a mist patch may spawn near the road almost directly east of Argynvostholt. Regardless of where the patch was, leaving his cave will deposit you in a waterfall some distance east of Van Richten's Tower.