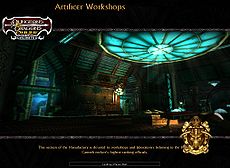 This section of the Manufactury is devoted to workshops and laboratories belonging to the House Cannith enclave's highest-ranking officials.

To enter this area:

Near the entry to Schemes of the Enemy (in the north of the House Cannith Manufactury), shown on your mini-map as the "Syrania Conduit Floor", is access to the eastern area of the Wilderness* - pull the lever and wait for the lift platform to cycle and take you up. Once there, bear "left", which leads east to the entrance to the Artificer Workshops wilderness area.

(* on the map it may appear that there is also access via the eastern exit from the very first, large southern room - but that lift is "broken") 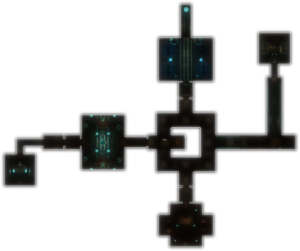 First you must complete (and turn in) the 3 quests entered from the House Cannith Manufactury wilderness area.

You enter the Artificer Workshops in the northeast corner of the map. There is a "security switch" in each of the northern and southern wings, which together open the barrier east. Once in the large eastern room (with the large, spinning crystal), on the northern and southern sides there are 3 levers on the wall and a lever covered by a force field opposite them, closer to the center. You have to pull the 3 wall levers to unlock the lone lever on that side, then quickly* pull that. Do it on both sides and the crystal will shatter, opening the way to the raid.

(* Each unlocking crystal stays lit for only 10 seconds after pulling the matching wall lever, making it difficult to solo, and (almost?) impossible without a "pet". The "force field" does not appear to drop once all 3 crystals are lit, but the lever can be pulled at that time. They do not have to stay lit while pulling, only be all lit when the pull is started.)

Continue down the eastern hallway where you'll find a couple small fights, a chest, a shrine, and (finally) the entry to The Master Artificer

In addition to the Rare Encounter / slayer / explorer missions typical to all wilderness adventure areas, the following quests can be found in this zone: 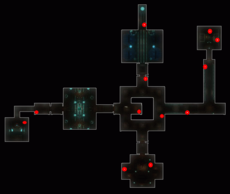 Journal works similar to Explorer points and they are worth 575 XP each. The bonus for finding all of them is 1,725 XP.