Quest for the Ancient Daggers

Remember that skeletons are vulnerable to blunt weapons, while zombies can be killed by slashing weapons or fire. 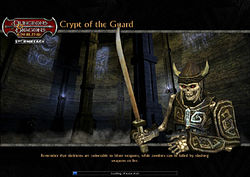 The Quest for Ancient Daggers is one of three quests bestowed by the would-be Lord Gerald Goodblade in the Harbor.

In this mission, the player descends into a dark crypt. He is advised to bring both a bludgeoning weapon and a slashing weapon.

This quest used to be non-repeatable, but if you were with a group of friends, you could have only one of you grab the quest at a time and rerun for each player.

The mission takes place in a series of catacombs. Important notes:

To solve the quest: