Wikipedia has an article on the same subject:
Player versus player

PvP is a standard MMO feature, which stands for "Player versus Player". Introduced with 2006 Module 3, PVP in DDO is considered to be Fluff: There are no rewards, and therefore there is no incentive other than personal enjoyment to compete in PVP. Player kills are not recorded in any way. You do not lose XP or receive item degradation.

A specified area of a tavern, set in a pit and often behind closed doors. When you enter the brawling floor, you will be "flagged" for PVP combat and can attack (and be attacked by) other players.

There are no restrictions as to what levels can enter the brawling area, so enter at your own risk. Once killed, you must climb out of the brawling area by the provided ladders where you will be automatically resurrected at 1 heath point, and begin Tavern Regeneration.

Tavern Brawling Areas are found in the following locations:

Bug: Due to a large number of lingering issues with the PvP system, the Death Match and Capture the Flag arenas are currently closed; however, a player can still attempt to travel to them. As you cannot leave a tavern while a match is pending and there is currently no way to cancel the match, this will only get you stuck in the tavern. This can be fixed by closing and restarting the game to forcibly break you out of the match.

In a Death Match, players can fight either one-on-one or party-versus-party. The score can be viewed in the objectives box, and player-specific kill scores can be viewed by pressing 'x'. Time limits of anywhere from 1 minute to 1 hour can be set. There are no rewards given for a Death Match. At the end of the match, all players will be teleported to where each was previous to the match.

Jackson Laws offers the Death Match fights and the Capture the Flag contests in these locations:

The objective of Capture the Flag is to pick up the opposing team's flag by walking over it, and bringing it back to your home team's base. By doing so, you advance your team's score. You may kill any opposing player that is currently carrying the flag; similarly, you may be killed while attempting to capture the other team's flag. As in a Death Match, you may select from a time limit of 1 minute to 1 hour, and no rewards are given to either team at the end of the game.

There are some spells that do not work in PvP, such as Wall of Fire and Blade Barrier. However, many area-of-effect spells still work, such as Ice Storm and Storm of Vengeance.

The challenge system allows players to set up teams and fight in PvP arenas. Time limits can be set, as well as arena map and type of challenge. This allows players to access arenas exclusive to their party and the challenger party. These arenas are instanced, and cannot be access by the general public. Despite its availability it is the least used form of PvP. 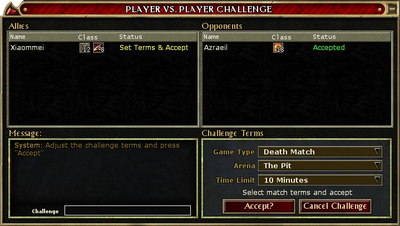