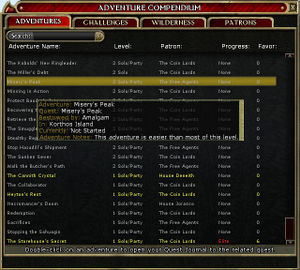 Adventure Compendium UI, added to the game with Module 2.0 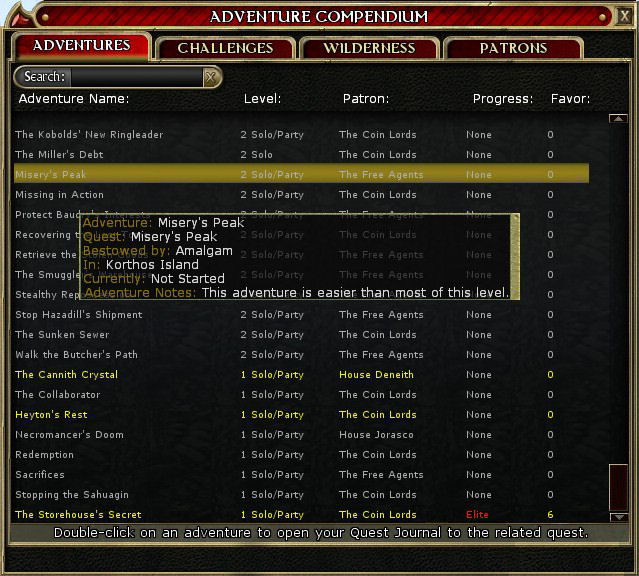 The Adventures tab list all quests associated with a patron favor, until up to two levels higher than the current character level. It lists the name of the quest, its level on normal difficulty and their patron. It will also be where you find out how much favor you have received from a quest - though this only shows up after you've earned it - and up to which difficulty you have run this quest yet.

Quests that are not started yet are listed grey, while quests that are either in progress (quest is bestowed by the quest giver) or completed are marked in yellow. With update 9 a search field has been added to search for a specific adventure by name. Additionally it is possible to sort the list by name, level, patron, progress or favor.

If you hover your mouse cursor over a quest, additional details are shown including who is the quest giver and where the quest entrance is. (Some quests are located in different places than their patron, e.g. The Tear of Dhakaan which is located in the House Phiarlan Enclave but gives Patron favor for House Kundarak).

A double click on a yellow line (bestowed/finished) will open the Quest Journal with additional details and descriptions to the quest. There you will find Quest descriptions of adventures that are not associated with a patron favor.

With Update 12 an additional tab has been added that includes the [Challenges] (currently only in House Cannith) which is made up like the Adventures tab, showing the name, level range, progress, patron and favor. Additionally it shows the rewards that can be obtained in the specific challenge.

The Wilderness tab shows the location, level, slayer count, explorers, and rare encounters. Note that some zones like Gianthold have different counting slayer zones inside. The details on those can only be found in the Quest Journal, while the Adventure Compendium only lists the total amount.

The Patron tab shows you the progress of your earned favor as well as the achieved rank for each specific patron. Your total amount of favor is shown when you hover on the total bar.

The Search bar, located top left under the tabs, allows you to search for some items listed in the additional details (Adventure, Quest, Bestowed by, In). This will filter the results shown on the page to your search item. For example, you can search for all quests located in the Harbor using "harbor", or all quests associated to a bestower using "Baudry".