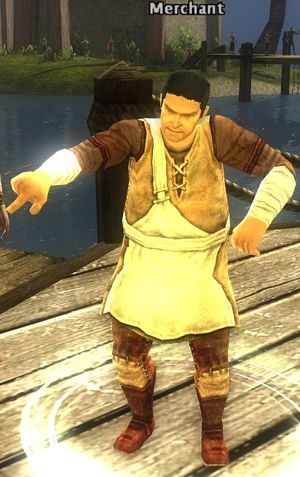 Description: The merchants moving goods through Stormreach Harbor must pay a heavy tariff to do business. The Coin Lords impose this tariff and the Harbor Guard collects it. Even with the expensive fees, trading in Stormreach is highly profitable and there are many merchants buzzing around the Harbor. The large quantity of Merchants require many Dock Workers to transport all their cargo.

Notes: These poor workers don't even get names.

The Harbor or The Wayward Lobster[edit]

Male Merchant going through customs on the docks leading to Lighthouse Island:

Male and Female Merchants near Hazadill's and Cartamon's Shipping Warehouses (before or after completing Hiding in Plain Sight):