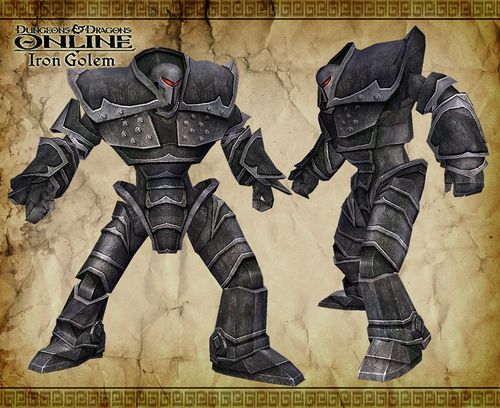 The iron golem, most powerful of constructs: fearless, unrelenting, well nigh indestructible. Standing over 12 feet tall, this lord of metal towers over pretenders at that title. It is almost totally immune to magic and essentially immune to weapons and physical attacks that are not made of adamantine. It is an unstoppable juggernaut. The warforged can claim sentience, even cherish a belief in their own souls and the possibility of an afterlife. The iron golem has neither of these things, and cares not at all. Indeed, should a warforged encounter an iron golem one-on-one, the warforged should expect to quickly put his belief in an afterlife to the test.

To fight this creature - if you absolutely must - adventurers must come prepared. Fighters require adamantine weapons, lest they prove entirely ineffective. Archers need adamantine-tipped arrows. Without such tools, the best that can be done is to swing the most damaging weapon possible, and don't worry too much about where you hit the golem. The golem has no delicate parts, no physical vulnerability, and no Achilles heel. For rogues, this is especially problematic. The best thing a rogue can do against a golem probably involves using a magic wand or scroll - not to damage the creature, since it would be immune to that also, but either to heal or to enhance the abilities of companions. Arcane spellcasters face a similar choice. Though every arcane caster should bring along a collection of electricity spells. They won't deal any damage, but they can slow down the metallic creature. Needless to say, leave the fire spells at home.

Disturbingly, of late iron golems have been seen with arcane casters of their own, probably their creators. These sorcerers toss around fireballs and other fiery area-of-effect spells with impunity, knowing that any iron golem caught in the area of effect would be healed, not wounded. And then there are the darker rumors, that certain winged spellcasters have used iron golems as guardians... and these creatures do not even need to use sorcery to bathe a golem in flames.

An iron golem’s body is sculpted from 5,000 pounds of pure iron, smelted with rare tinctures and admixtures costing at least 10,000 gp.

An iron golem is immune to any spell or spell-like ability that allows spell resistance. In addition, certain spells and effects function differently against the creature, as noted below.

A magical attack that deals electricity damage slows an iron golem (as the slow spell) for 30 seconds, with no saving throw.

A magical attack that deals fire damage breaks any slow effect on the golem and heals 1 point of damage for each 3 points of damage the attack would otherwise deal. For example, an iron golem hit by a fireball gains back 6 hit points if the damage total is 18 points. An iron golem gets no saving throw against fire effects.

Unlike in PnP, most damage spells in DDO do not allow spell resistance. To combat this, Iron Golems instead have massive elemental absorption. 50% Absorption for ALL Energy types. This includes: Lightning, Cold, Acid, Sonic, Light and even force damage. This is new as of Update 9. Previously they were simply immune to all these damage types.

An iron golem is affected normally by rust attacks, such as that of a rust monster or a rusting grasp spell.

A construct possesses the following traits (unless otherwise noted in a creature’s entry).