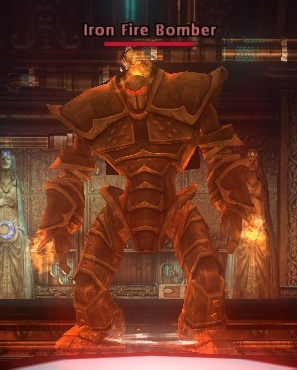 Habitat: Blown to Bits — Northeast corner. Activated once you blow his box.


Description: The Iron Bomber is an <Extreme Challenge Warning> Powerful Red Named Iron Golem optional boss encountered in Blown to Bits. Like most Iron Golems, fire heals him, so avoid using Demolition Charges on him.

He also loves to drop Demolition Charges of his own, then run off and let you explode... Luckily he is kind enough to provide you with a warning as he drops one: He punches the ground with a lightning blast, and give a warning on /say chat.

He has quite a huge amount of hit points, so attacking him with proper weaponry and spell is a must. Adamantine weaponry breaks his DR, and spells like Blade Barrier, Cometfall and various DoT spells are effective.

If you manage to defeat him, his chest may contain the Fabricator's Bracers.

Breath Weapon (Fire)
10-foot cube, cloud of heavy damage flame spews from his mouth. Reflex save for half.

*Immunity to Magic (Ex)
An iron golem is immune to any spell or spell-like ability that allows spell resistance. In addition, certain spells and effects function differently against the creature, as noted below.

A magical attack that deals electricity damage slows an iron golem (as the slow spell) for 30 seconds, with no saving throw.

A magical attack that deals fire damage breaks any slow effect on the golem and heals 1 point of damage for each 3 points of damage the attack would otherwise deal. For example, an iron golem hit by a fireball gains back 6 hit points if the damage total is 18 points. An iron golem gets no saving throw against fire effects.

Unlike in PnP, most damage spells in DDO do not allow spell resistance. To combat this, Iron Golems instead have massive elemental absorption. 50% Absorption for ALL Energy types. This includes: Lightning, Cold, Acid, Sonic, Light and even force damage. This is new as of Update 9. Previously they were simply immune to all these damage types.