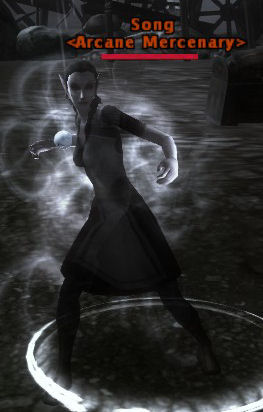 Oh hi! My boss, Dom, says the Netherese need that scroll, so we're going to take it from you, ok?

"Mad Sorceress, Mistriss of Storms. Song and Dom appear to have a long-standing friendship from their youth. No one knows why Song bestowed the "Mistriss of Storms" moniker upon herself. Her arcane powers over the forces of nature are quite limited, and there doesn't appear to be any group that formally recognizes her title. In my experience, she's bat-guano crazy, so it may be a product of her condition. Still, she is a powerful spellcaster. Coupled with her unpredictable nature, she's extremely dangerous. These mercanaries respect that. You can tell by the way they're willing to throw themselves into danger for her."