The server data for the sixth season of the Hardcore League is wiped on December 4th! Make sure to transfer any characters you still want!

Reward collectibles from the 5th Anniversary Pirate Parrrty in Treasure of Crystal Cove. 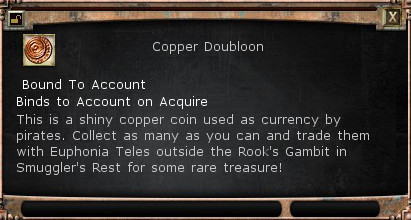 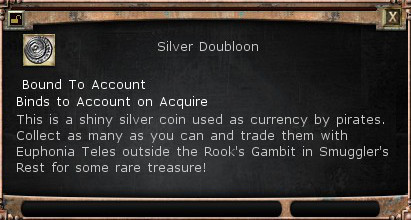 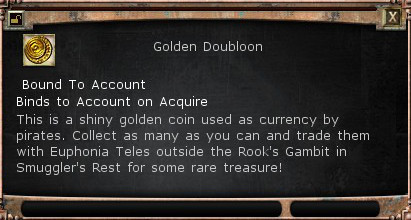 With a Treasure Compass a character can gain access to the Crystal Cove during the Treasure of Crystal Cove event. In exchange for the compass, Foreman Wee Yip Yip will apply Paid to the Navigator

You've paid a Treasure Compass to the Smuggler's Rest Navigator. Until this effect wears off, you may travel to Crystal Cove without further payment. which gives a six-minute access window to the Crystal Cove challenge. They can be purchased from Euphonia's Barter Box (400 copper, 200 silver, and 100 gold doubloons), purchased from the DDO Store for 50 DDO Points, or rarely found by killing monsters in Smuggler's Rest. Unlike other items dropped in Smuggler's Rest, the treasure compass will not go into any bag. It is bound to character on acquire.