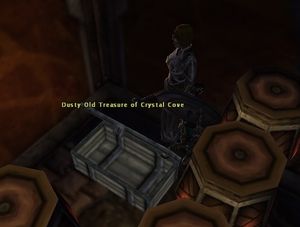 Dusty Old Treasure of Crystal Cove is a crafting device located in the Rook's Gambit, a tavern in Smuggler's Rest. It is accessible during the Treasure of Crystal Cove event. It uses collectables like doubloons, various stolen gems, the trinkets it produces and green dragonshards. It can be used to craft numerous pieces of equipment including consumables. Crafted equipment is mostly bound to account except the most powerful ones that are bound to character. Most powerful consumables are also BtA except Bottomless Flask of Rum is BtC.

All versions of the bold, nimble, cunning, and stalwart trinkets are ML4. The greater versions of these trinkets are also used as ingredients for tier 3 equipment recipes. For a fully upgraded Trinket it costs 500 Gold 1250 Silver 2500 Copper Doubloons and 700 Green Dragon Shards.

A pirate is courageous and leaps into battle without fear. This trinket gives you boosts to the damage of your attacks.

Pirates have keen minds that allow them to outsmart their foes. This trinket gives you boosts to the effectiveness of your spells.

Pirates are deft and light on their feet, able to dodge enemy attacks and land their own with ease. This trinket boosts the accuracy of your attacks and improves your dodging ability.

A pirate is steadfast and won't back down, even if the odds look grim. This trinket gives you boosts to your survivability.

This eternal bound to character potion recharges over time, thus is not truly a consumable. It shares the recharge timer with all of its versions, thus creating more than one item has no benefit. It is also the most expensive item to craft.

There is a vast selection of items that can be purchased via doubloons and upgraded in several steps. The higher levels of the initial version need more doubloons and gems, and the tier upgrades require green dragonshards and finally the highest tier needs a trinket as well. The minimum level of the item increases by steps, 4-8-12-16-20.

For example the initial level 20 version of the Brigand's Cutlass requires:

Each item (Weapon, Armor, ...) then has additional tiers to upgrade. Each of these tier upgrades adds additional abilities while staying at the same level. For example, the second tier of the Level 20 Brigand's Cutlass adds +1 damage and attack and 5% more incite, the third tier adds absolute chaos and a red augment slot.

While it is not possible to go directly to Tier III of a weapon, it is however possible to directly buy the initial version of a specific level, which is in the end cheaper than upgrading the level afterward.

Below is shown the full upgrade matrix with the requirements to upgrade a Brigand's Cutlass. From left to right are the costs to upgrade the tier of a level, while the different levels are listed from top to bottom. The initial item can be upgraded to Tier II via Upgrade I and to Tier III via Upgrade II. As one can see it is even possible to upgrade a level 4 weapon to a level 8 weapon and further. However the level upgrade will only result in the base version of the item, and it is much cheaper to just buy they level you want instead of crafting a lower level and upgrading it. Also visible in this matrix is that for Tier II of the weapon a fully upgraded Trinket is needed as well, which is the reason to put the requirements for the trinket in the matrix as well. Note that the requirements for the other weapons nearly look the same. The only difference is that another Trinket is used and that for example the Dagger has different Gem types for the initial buy, but the cost and structure remain the same.