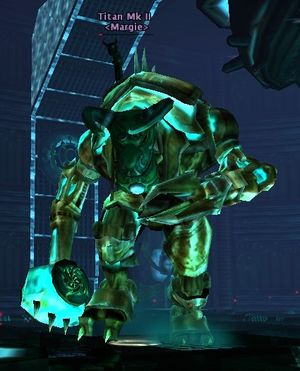 
Description: Titan Mk II <Margie> aka "The Green One" is one of the raid bosses of The Master Artificer raid, introduced in Update 11. Titan Mk II is encountered along with her buddy Titan Mk III <Ronny> during the final stage of the raid. Margie was known as Sally on Lamannia.

Margie is primarily a melee combatant. With extremely devastating melee attacks, she can pose a major threat to even the most prepared of raid groups. Ideally you should have your toughest tank engage her and keep her stable while the group prepares Ronny. However they both need to die at the same moment, so you will need to engage Margie in melee after Ronny is prepared.