You stumbled across a great evil beneath the Wavecrest Tavern. Now you must find a way to destroy it. 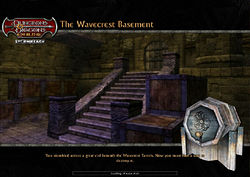 After returning Old Sully's Grog to Sigmund, he directs you to Brother Augustus, who destroys the artifact and sends you back into the basement for further exploration.

* Seek out the source of evil beneath the Wavecrest