This special adventure zone is accessed through House Cannith Manufactury. This area is considered a raid and is thus non-scaling unlike the Manufactury itself.

This is a level 20 Wilderness Adventure Area, allowing characters from levels 15 to 25 to get full experience.

Near the entry to Schemes of the Enemy (in the north of the House Cannith Manufactury), shown on your mini-map as the "Syrania Conduit Floor", is access to the eastern area of the Wilderness* - pull the lever and wait for the lift platform to cycle and take you up. Once there, bear "right", which leads south to the entrance to the Research Facility wilderness area.

(* on the map it may appear that there is also access via the eastern exit from the very first, large southern room - but that lift is "broken") 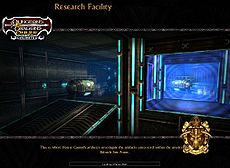 After crossing the first locked door, you will be trapped between electrified floors and ambushed. The electric floor can be disabled to allow safe crossing for the rest of the party.

In addition to the Rare Encounter / Slayer / Explorer missions typical to all Wilderness Adventure Areas, the following missions can be found in this zone:

Each Journal (works similar to Explorer points) is worth 575 XP; the bonus for finding all of them is 1,725 XP.