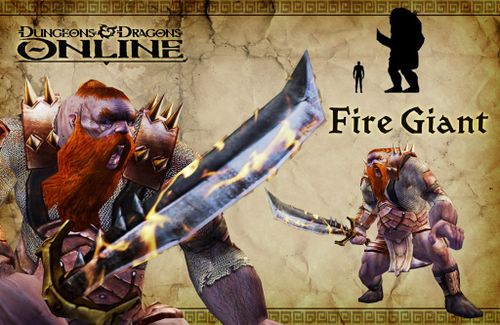 Fire Giants are one of the True Giants, being from the Giant type and Giant race.

Towering twelve feet tall, the fire giant mocks the puny humans that stand beneath it. Unlike the primitive hill giant, his prideful arrogance is not folly or grounded in cheerful ignorance. Perhaps it's an odd fact that these giants look a bit like dwarves to humans, though these titanic dwarves are ancient enemies of their smaller kin. But make no mistake; if their numbers were greater, these giants could dominate the face of Eberron far more effectively than man. They are bigger, stronger, tougher, and even wiser and more intelligent than most men. They're simply more impressive in every way. They have as much mastery over wizardry as man, or more, given their history that extends for thousands of years before man appeared in the pages of history.