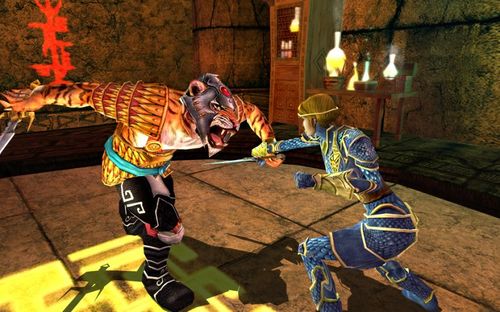 Rakshasas stand 6 to 7 feet tall and weigh between 250 and 300 pounds. Their natural shapes are relatively humanoid although they are clearly not human, as they appear more as humanoid beasts, usually tigers. Their hands also look disturbing to most humans, as their palms are where the back of the hands would be in humans. The Rakshasa are capable of hiding their disturbing appearance at any time, as they can choose any humanoid form at will. All rakshasas wear human clothing of the highest quality.

Ten million years ago, Khyber gave birth to fiendish offspring; the most prominent of his creation were the Rakshasas. The Na-Vakihti or Rakshasa Rajas (who were equivalent to Demon Princes in power) burst forth from the domain of the Dragon Below and transformed the surface of Eberron in to a hellish nightmare where they reigned supreme. And thus is marked the beginning of the Age of Demons.

After a millions of years of oppression the Dragons of Argonessen forged an alliance with the Dragons of Syberis and the Couatls. Legends say that under their combined powers, the dragons and couatls were able to create the Silver Cataclysm. This event sealed away all the powerful Rakshasa Rajas and banished many of the fiendish forces back to Khyber. The remaining Rakshasa survivors fled to the Demon Wastes, in the continent of Khorvare. There remains the last remnant of the ancient Rakshasa civilization.

Today, the Rakshasas remain powerful but are paled when compared to their ancestors. Many of the Rakshasas belong to an organization called the Lords of Dust. They are perhaps the most important power group in the Demon Wastes and are devoted servants of the imprisoned fiends. While some among the Lords of Dust seek to channel the imprisoned rajahs’ power to enhance their own, most strive to break the bonds of the fiend-lords and usher in a new Age of Demons.